Diving and underwater adventures at Halaveli 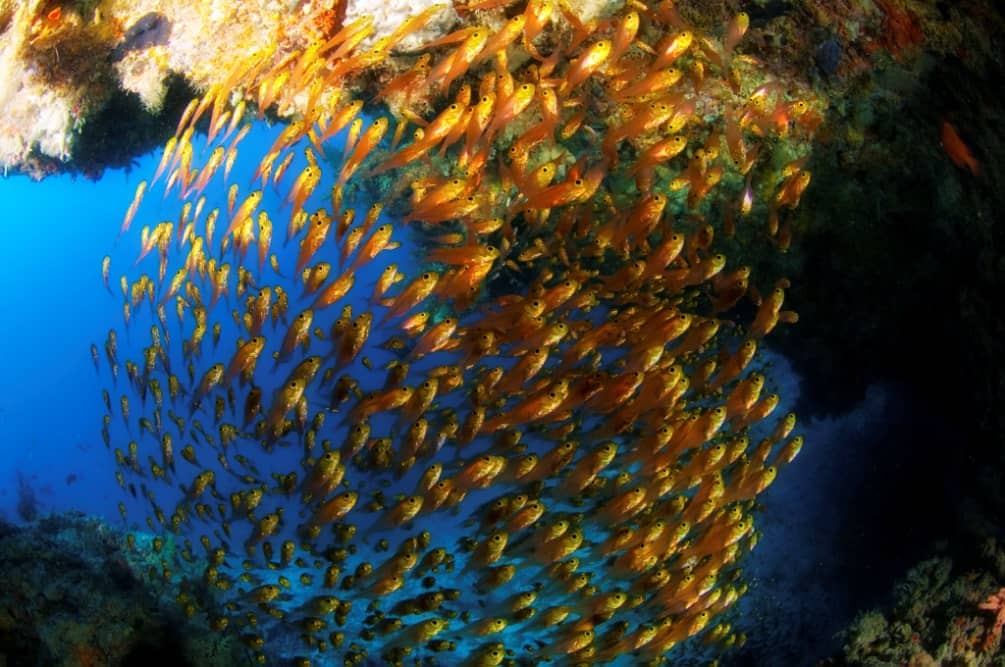 Here’s the second installment from marine biologist Robin Aiello, with tales of her escapades and adventures underwater at Halaveli. 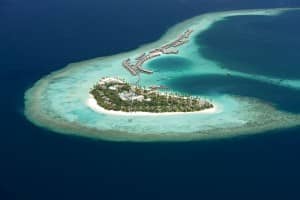 Some of my best moments this week…

It has been another wonderful week at Halaveli Resort. I’m getting into the routine of diving most mornings, then maybe a snorkel, and every Monday and Thursday night I give a talk on the weird and wonderful marine creatures found here in the Maldives.

I cannot describe the beauty of sitting on the beach at sunset with the shifting colours of the skies as a backdrop to the nightly frenzy of dive-bombing seabirds (terns) as they finish their evening feeding session – just perfect. 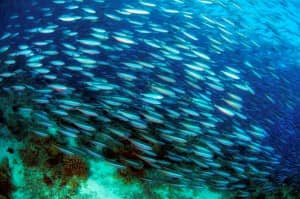 The TGI Dive Center has been very busy. This week has been full of great dives, snorkels and cruising excursions. The tides have been perfect, so in the mornings the visibility has been fantastic – we had about 30 metres this morning. And, the currents have also been good.

I love current diving for one main reason – the fish life is extraordinary. The waters above the reef become packed full of all sorts of fish. A majority of the fish are the plankton feeders including small neon blue fusiliers, black surgeon fish, red-toothed trigger fish and unicorn fish, which, by the way, love to hover over your head playing in the bubbles.

They seem to get a real ‘kick’ out of the jacuzzi-like blasts of bubbles as we exhale. But there are also the less abundant, but eye-catching predatory fish, such as the giant trevallies (jacks), blue trevallies (jacks), dogtooth tuna, black snappers and, of course, the whitetip and grey reef sharks.

One memorable dive the other day was at a reef where the current was a good ‘medium – plus’ (according to our dive guide). We made our way along the reef to a spectacular look out point, where we hooked in with our reef hooks and looked out into the blue water ahead of us. 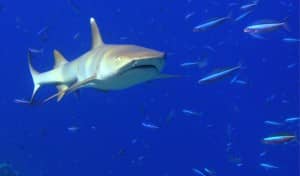 There we were – the six divers flying like kites a few feet above the reef. Suddenly, to my left, a motion caught my eye – there was a very young (not more than a few months old) whitetip reef shark hovering right next to me, looking right at me. Just beyond was another one. They were so cute and perfect without a scratch or scar on them – perfect little sharks.

But the funny thing was that they obviously had not quite mastered the skill of swimming in such strong currents. For several minutes at a time they would be hovering just fine, barely moving their tail, but maintaining perfect position beside me. But then, the baby shark would start drifting closer and closer to me, until it was a mere few inches from my face.

Then, suddenly it seemed to realize that it was too close and would try to quickly maneuver away, but it didn’t quite have the skill to do it gracefully. Instead, it would tumble and get tossed by the current and become totally out-of-control -discombobulated – before regaining control, position and composure. It would then take up position next to me again and the whole sequence would start all over again. Hilarious!

One of the dive’s highlights appeared without notice, slowly appearing out of the murky distance. The large shadow came closer and it was revealed to be a huge male Napoleon (or Humphead) Wrasse. He was magnificent – about 1.5m long and 1m deep. This dark green giant swam so easily against the current making it seem like there was no current at all. He simply drifted past in front of us and then off again into the distance. 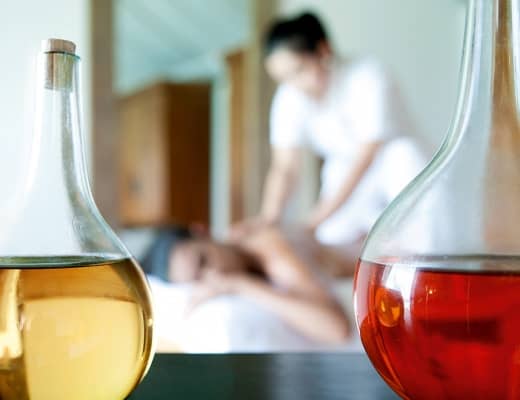 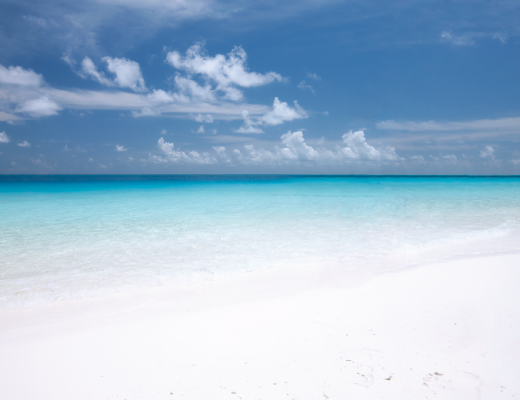 Chill out tunes for the sunshine